The Christian faith is sometimes called a "historical religion".  This means it isn't just a philosophy of life.  It makes claims about world history, claims which need to be true for its teachings to have any merit.  Among these are the creation of the universe, the resurrection of Jesus, and a real Adam and Eve.

The first one seems to have checked out pretty well, the second has received robust defenses, but the third one... not as much.  My feeling is it’s something many Christians would rather not look at for fear of being wrong.

So this year I thought I'd read a couple books on the subject and see whether the Catholic understanding of Adam and Eve had bit the dust.

What Does the Faith Demand?

Before we begin, I need to set out what I'm looking for here.  If the standard is 100% Genesis literalism, then there's no reason to waste my money on anthropology books.  There's no way to reconcile Young Earth Creationism with modern science.

But the Catholic Church doesn't ask us to believe Young Earth Creationism. For the sake of our doctrine of the Fall, it only asks that "true" human beings come from an original first pair.  Humani Generis says:


“The faithful cannot embrace that opinion which maintains that either after Adam there existed on this earth true men who did not take their origin through natural generation from him as from the first parent of all, or that Adam represents a certain number of first parents. Now it is in no way apparent how such an opinion can be reconciled with that which the sources of revealed truth propose with regard to original sin.” - HG 37

Note that we're not obliged to believe these two lived 7000 years ago, or any determined time ago.  The only important thing is that we come from a first set of "true" humans.

Now, what does it mean to be a "true" human?  In Catholic doctrine, human beings are made in God's image and likeness.  This is understood to point to our capacity for reason, intellect, conscience, free-will, transcendent desires, and an immortal soul.

Back in 2016 I theorized that you could have a race of Non-Rational Biological Humans (NRBH) which wouldn't count as "true" humans.  God could uplift two of them to "true" human status, then their progeny could interbreed with the NRBH's and spread this fire of rationality throughout the species.

Such a thing could be invisible to our genetic history, but nonetheless fulfill Catholic doctrine.  In fact, this theory could make sense of other questions like: "Who was Cain afraid of after the first murder?"


The Dawn of Homo Sapiens

So the two books I got were "Masters of the Planet" by Ian Tattersall and "Lone Survivors" by Christopher Stinger. Both were published in 2012 and were written with no concern for religious doctrines - just the latest on the field from a secular perspective. 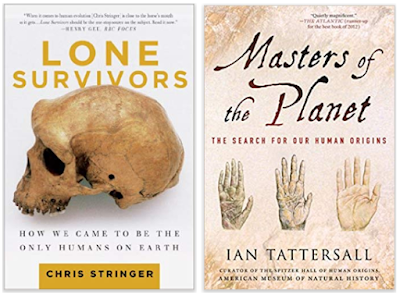 [On an editorial note, Tattersall's book was by far the more readable of the two. It presented everything in chronological order.  Lone Survivors, on the other hand, had no discernible organizational principle.  Getting useful information out of the book was like picking meat out of a crab.  Plus, he used the word "human" to refer to any advanced hominid, which made it difficult to tell what species he was talking about.]

Tattersall points out that hominids have been around for a long, long time.  While the criteria and dates are debated, he puts the first hominids arising around 7 million years ago [1].

Throughout the book, he traces the evolution of these creatures all the way to our nearest cousins, Homo Neandrathalis.  He shows how they became more innovative and clever over the eons, even to the point of toolmaking.  However, he consistently points out that their intellects are “non-symbolic”.  That is, these ancestors lack the capacity of abstract rational thought [2].

Both books say the earliest archaeological record of Homo Sapiens is found in Ethiopia around 200,000 years ago.  These artifacts (skeletal remains) where discovered at sites named Omo and Herto. [3,4]


[Note:  More recently, a human skull found in Morocco was re-dated to 300,000 years ago.  If that is accurate, maybe the species started up there and migrated southeast?]

Lone Survivors goes into a bit more detail about the concept of a “Mitochondrial Eve” and a “Y-Chromosome Adam”.  Here’s what those are...

Mitochondrial DNA is DNA which is found in Mitochondria.  This DNA gets passed from mother to child, with no contribution coming from any male.  So you have the same mDNA as your mother.  And she has the same mDNA as HER mother.  And so on… but how far back?  Stinger's book says geneticists have figured out these lineages do converge upon a single female, who is called Mitochondrial Eve, and who lived around 135,000 to 200,000 years ago. [5]

A similar thing can be done with the DNA on the Y-Chromosome, which get passed down from father to son, with no input from any female.  This gives rise to a hypothetical “Y-Chromosome Adam”, who is thought to live around 142,000 years ago. [6]

Now, the temptation is to look at this and conclude, “Aha!  We found them. We found Adam and Eve!”  But I really think this is a false trail.  I suspect this genetic evidence has a lot to do with the origin of the final human form, or perhaps a population bottleneck, but little to do with the advent of “true” humans.


The Rise of Rationality:

This is where both books told me something I didn't expect.  Tattersall's book states the following:


"This is not the whole story, for as far as Homo Sapiens is concerned it appears that body form was one thing, while the symbolic cognitive system that distinguishes us so greatly from all other creatures was entirely another.  The two were not acquired at the same time, and the earliest anatomical Homo Sapiens appear right now to have been cognitively indistinguishable from the Neanderthals and other contemporaries." [7]


"Our ancestors made an almost unimaginable transition from a non-symbolic, non-linguistic way of processing and communicating information about the world to the symbolic and linguistic condition we enjoy today.  It is a qualitative leap in cognitive state unparalleled in history.  Indeed, as I've said, the only reason we have for believing that such a leap could ever have been made, is that it was made.  And it seems to have been made well after the acquisition by our species of its distinctive modern biological form." [8]


"The archaeologist Clive Gamble, following the primatologist Lars Rodseth, emphasized that one of the most distinct things about modern humans compared with our primate relatives is our 'release from proximity.'  Probably all humans before us, like the apes they evolved from, could only work through face-to-face encounters, but with the rise of symbolism (and the associated development of language), people were liberated from proximity and could communicate through time and space." [9]

I had no idea back in 2016, but apparently anthropologists have been proposing that our species started off as NRBHs.  The question is when and how they transitioned to modern (true) humans.

To answer that question, archaeologists needed to uncover signs that humans were thinking abstractly, conceiving of the world in symbolic forms.  They were looking for things like complex tools, art, advanced structures, long-distance transport for raw materials, cultural complexity, and planning. [10]

Some of the earliest stuff which shows up in the archaeological record are (seemingly) decorative beads which were found around Nazareth dated to 100,000 years ago [11,12].  Other beads show up in Morocco dated to about 80,000 years ago [13,14].

Even stronger evidence comes from a pair of caves sites in South Africa called Blombos and Pinnacle Point.  The boast a piece of abstract geometric art dated to 77,000 years ago, as well as evidence of advanced stone-crafting (known as pressure-flaking) dated to 55,000 years ago [15,16].

Stringer's book highlights a number of different ideas which have been proposed regarding the true genesis of human rationality.

In any event, what seems to be agreed upon is that at some point, humanity underwent a qualitative change.  Tattersall writes:


"Our novel way of dealing with information was hardly a predictable outcome of any identifiable trend that preceded it.  And neither was it simply a threshold effect of acquiring a greater and greater brain volume." [...]  "The only evident alternative is that our strange intellectual faculty is attributable to a novel neural conformation, a change in the internal organization and wiring of our brains." [20]

But he later adds:


"So far at least, then, there is no 'silver bullet' genes that we can finger as the root cause of our cognitive uniqueness." [21]

(Note: This quite certainly wouldn't have been Adam's true skin color)

Let's see if we can assemble this together into a theory which would be viable both in the realm of modern anthropology and Catholic theology.

Now, I for one am not convinced that decorative beads are a strong sign of rational, symbolic thought.  The abstract art and advanced toolmaking seem like a better bet to me.

Let's suppose that roughly 80,000 years ago, God reached into a community of NRBH's in the African continent and granted two individuals the gift of a rational soul.  This could be accompanied by a physical (genetic) change, or even an epigentic change - either way.

Those two humans were offered a life at peace with God, but reject it.  They eventually have children.*  Some of these kids might have mated with each other.  Others might have mated with the NRBH's which surrounded them.  And when they did, their children had the nature of the "true" human parent, with the "rationality switch" kicked on.

Thus, the image of God would spread over the entirety of Homo Sapiens over time, but in a way which wouldn't show up genetically.

Thanks for joining me.


All references to paperback versions:

*(Some folks mistakenly think Adam and Eve only had three kids, but the Bible says they had more.)
Posted by ACTS Apologist at 4:03 AM

ACTS Apologist
I am an amateur Catholic apologist doing his best to create a resource for people curious about the Catholic faith.